Prospect-Refuge Theory; How You Chose Your Favourite Seat

Do you have a favourite seat in the office? How about an inexplicable yet visceral dislike to a different seat in that same room? Ever wondered why? It could be based on some of our basic survival instincts…

In 1975 Jay Appleton did some seminal work which led him to the conclusion that most people have an ‘inborn desire’ for environments that allow the capacity to observe without being seen; to assess threats from a place of safety, otherwise known as ‘Prospect-Refuge Theory’.

The theory has since been expanded to state that spaces that achieve a balance between prospects and refuges are preferable. In natural environments, prospects could be compared to hills, mountains, and trees near open settings, whereas refuges would include enclosed spaces such as caves, dense vegetation, and climbable trees with dense canopies nearby.

As yourself, which image is the most appealing? Is it the dense and overgrown area with plenty of places to hide – yet no clarity on what’s around you – or the mixture of large open spaces and places to hide? 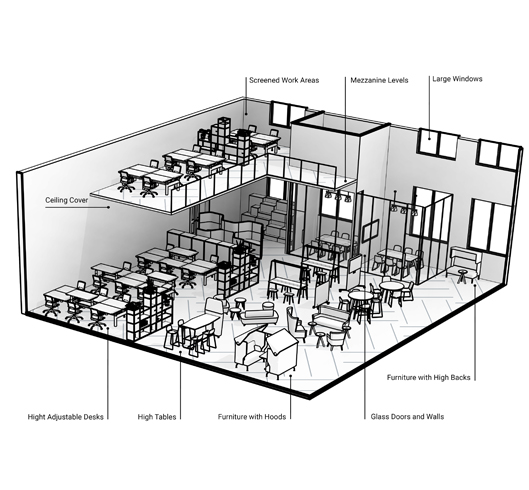 In the office, prospects would include mezzanine levels, high tables, generous use of windows and glass doors. Refuges would include lowered ceilings, seating with overhead cover and screened areas.

It has been shown the preference for a mix of these elements is heightened if the environment is perceived to be hazardous or potentially hazardous. However,  in this scenario, we’re not talking about physical hazards – the theory extends to emotional and mental hazards. So when your stress levels are high in the office having a high back booth seat to retreat to could make all the difference.

There is a lot to take from this into office design, for both the architecture of the space as well as interior furniture choices and layout. If you would like any advice on adding these concepts into your office, please get in touch at hello@dianebutterworth.com 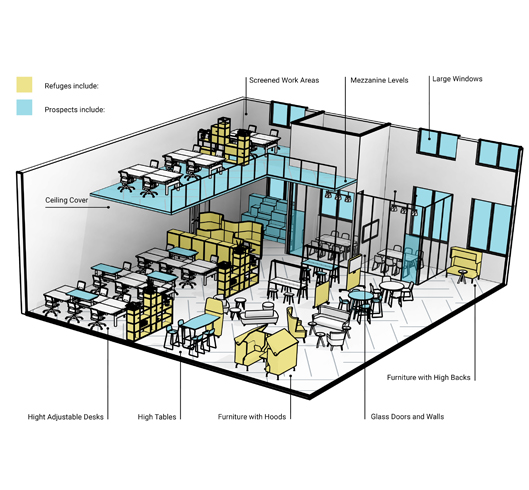